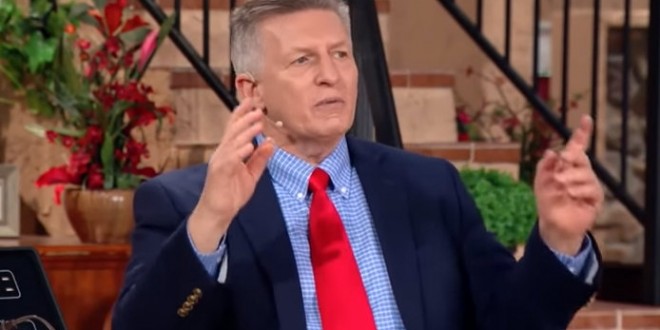 Pastor Rick Wiles: Those Nazi Freaks At Target Are Going To Get Us All Killed In A Nuclear War [AUDIO]

Far-right radio host Rick Wiles devoted the first half of his “Trunews” program on Monday to railing against Target’s policy of allowing transgender people to use the restroom that matches their gender identity, warning that the retail chain’s bathroom policy has helped turn America into Sodom and Gomorrah, which God will now destroy through a nuclear war with Russia. After reading from a statement about the bathroom policy from Target spokeswoman Molly Snyder, Wiles bellowed, “How about if I just urinate on your floor? How about that, Molly? Because you’re defecating on this nation.”

Reading from a Business Insider article about an increase in Russian submarine activity, Wiles connected the dots. “Doc, God is going to use the Russians to bring down Sodom and Gomorrah if there’s no repentance in this land,” he said. “Listen, these freaks are going to get us all killed. They’re going to get us all killed.” “When there is a nuclear war, we all die,” he explained. “Now, those of us who are saved are going to go home to be with the Lord. Those who are unsaved are going to burn in hell. But we’re all going to die in a nuclear war thanks to the sodomites that are in control of this nation right now.”

Previous Ralph Nader: Why Should Bernie Sanders Drop Out?
Next Nutbag Cruz Supporter Steve Deace Melts Down On CNN, Screams That Everybody Is Lying [VIDEO]