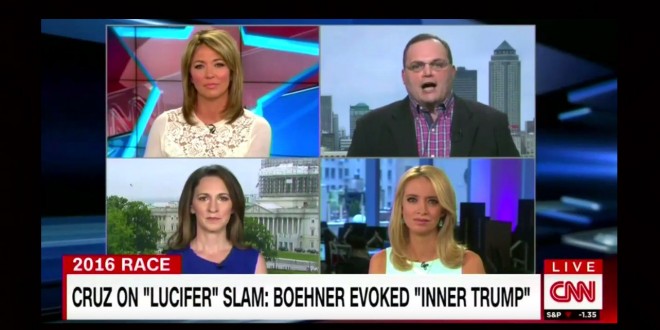 Nutbag Cruz Supporter Steve Deace Melts Down On CNN, Screams That Everybody Is Lying [VIDEO]

The Hill sets up the clip below:

A prominent Ted Cruz supporter lit into a Donald Trump surrogate Thursday during a heated CNN segment. “Kayleigh, I don’t know you. Seriously, do you have any integrity at all?” Iowa radio host Steve Deace said to Trump backer Kayleigh McEnany as CNN host Brooke Baldwin shook her head. Baldwin interjected to ask Deace to keep it professional as the conservative radio host continued to rip McEnany.

“I am keeping it professional. She’s the one lying,” said Deace, who criticized McEnany for arguing that Cruz had silenced voters in Colorado by winning delegates elected at a convention. “There is no voterless elections. Every delegate is elected. Including Pennsylvania,” Deace continued. “This is the biggest lie and the biggest scam from a guy that lied repeatedly in the entire campaign and whose campaign is built on a lie.” He went on to repeatedly shout at McEnany to “stop lying,” accusing Trump surrogates of misleading the American people.

Previous Pastor Rick Wiles: Those Nazi Freaks At Target Are Going To Get Us All Killed In A Nuclear War [AUDIO]
Next Peter King: Ted Cruz Gives Lucifer A Bad Name [VIDEO]