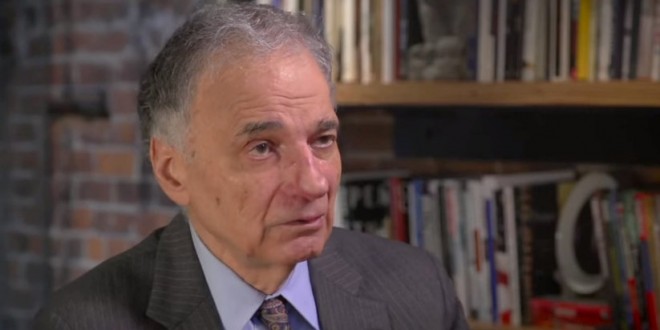 Ralph Nader: Why Should Bernie Sanders Drop Out?

“Why should Bernie Sanders drop out? There could be a scandal with Hillary Clinton. Those transcripts and closed door meetings with the big bankers and other corporations could be released. He made a good point, Bernie, when he said he wants to go all the way to the convention so everyone — ending up in California, every voter can have a right to vote for the candidate of their choice.” – Ralph Nader, speaking today on CNN.

Nader was asked what he would do if he were in Sanders’ position.

“Well, I would never have run in the Democratic Party, so that’s a question I cannot answer. He ran in the Democratic Party and he’s doing very, very well. In fact, if independent voters could vote in those primaries this last Tuesday, he would have won them all,” he said, echoing a line from the Sanders campaign. “He won Rhode Island because independent candidates [sic] could vote in the Democratic primary. So he really is ahead in the polls against Trump, ahead of Hillary against Trump, and by the way, Trump is not a sure thing. He’s got a lot of vulnerabilities, and he can’t keep his mouth shut to the delight of the ratings of CNN and Fox News.”

Previous Senate Dems Introduce Bill To Ban Ex-Gay Torture
Next Pastor Rick Wiles: Those Nazi Freaks At Target Are Going To Get Us All Killed In A Nuclear War [AUDIO]