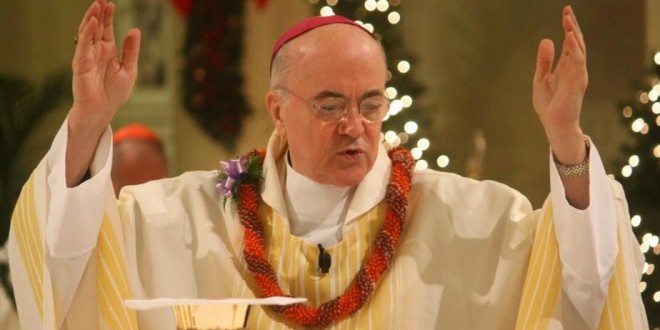 Experience teaches us that when Bergoglio says something, he does it with a very precise purpose: to make others interpret his words in the broadest possible sense. The front pages of newspapers all over the world are announcing today: ‘The Pope Approves Gay Marriage’ – even if technically this is not what he said. But this was exactly the result that he and the Vatican gay lobby wanted.

By dint of provoking, he hopes that some bishop will grow tired of daily feeling afflicted by his doctrine and morals; he hopes that a group of cardinals will formally accuse him of heresy and call for his deposition. And by doing so, Bergoglio would have the pretext of accusing these prelates of being ‘enemies of the Pope,’ of placing themselves outside the Church, of wanting a schism.

Bergoglio is a candidate for ‘pontiff’ of a new religion, with new commandments, new morals, and new liturgies. He distances himself from the Catholic religion and from Christ, and consequently from the Hierarchy and the faithful, disavowing them and leaving them at the mercy of the globalist dictatorship. Those who do not adapt to this new code will therefore be ostracized by society and by this new ‘church’ as a foreign body.

Quite notably, throughout the piece Vigano refers to the pope by his birth name and not “Holy Father” or any of the other honorifics so carefully used even by his critics within the Catholic Church.

Vigano, you may recall, was shitcanned as Vatican envoy to the United States in 2016 after he sprung anti-gay Kentucky clerk Kim Davis on Pope Francis for a photo op during a visit to Washington DC. Vigano and the Liberty Counsel, who helped engineer the stunt, laughably claimed that the Pope had requested an audience with Davis.

Vigano last appeared on JMG when he praised Trump for “battling the deep state.” In that same piece, he declared that a sinister conspiracy is behind social justice protests and the pandemic.