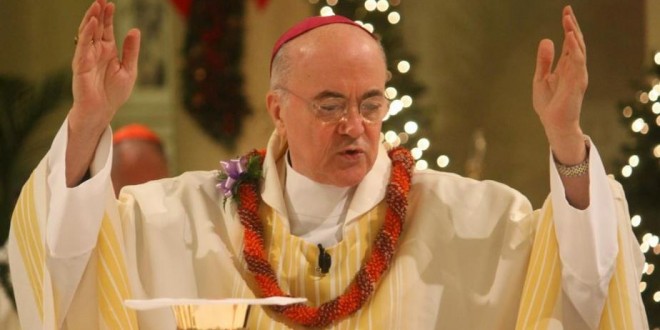 Archbishop Praises Trump For Battling The “Deep State,” Claims Conspiracy Is Behind Police Protests And COVID

A Catholic archbishop said the “deep state” is “fiercely waging war against” President Trump amid the coronavirus pandemic and riots following the death of George Floyd. Archbishop Carlo Maria Vigano of Rome urged Trump on Sunday to fight against the so-called “deep state,” mainstream media, and the “deep church” in an open letter.

“In recent months we have been witnessing the formation of two opposing sides that I would call Biblical: the children of light and the children of darkness,” Vigano writes, adding that the deep state has “decided to show their cards, so to speak, by now revealing their plans.”

Vigano believes Americans “are mature and have now understood how much the mainstream media does not want to spread the truth but seeks to silence and distort it, spreading the lie that is useful for the purposes of their masters.”

Viganò’s letter could hardly be more different in substance and tone from a statement released by Washington, D.C.’s Archbishop Wilton Gregory objecting to Trump visiting the John Paul II shrine in the nation’s capital for a photo op the morning after peaceful protesters were violently moved for a Trump picture-taking session at St. John’s Episcopal Church.

Regarding the widespread protests that have spread since the polic​e killing of George Floyd, Viganò wrote, “It will not be surprising if, in a few months, we learn once again that hidden behind these acts of vandalism and violence there are those who hope to profit from the dissolution of the social order so as to build a world without freedom: Solve et Coagula, as the Masonic adage teaches.” ​

Vigano, you may recall, was shitcanned as Vatican envoy to the United States in 2016 after he sprung anti-gay Kentucky clerk Kim Davis on Pope Francis for a photo op during a visit to Washington DC. Vigano and the Liberty Counsel, who helped engineer the stunt, laughably claimed that the Pope had requested an audience with Davis.