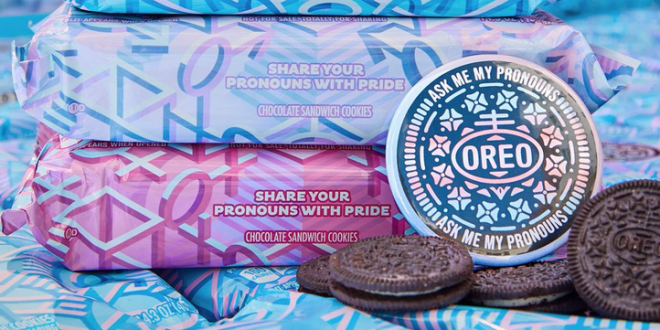 Predictable furor from the far-right Federalist:

Oreo cookies, a division of international foods giant Nabisco, announced yesterday a “special” LGBT edition that includes lectures about how to use transgender pronouns.

“We’re proud to celebrate inclusivity for all gender identities and expressions,” the company wrote in its Facebook post announcing the change. “In partnership with NCTE, we’re giving away special edition Pronoun Packs and encouraging everybody to share their pronouns with Pride today and every day.”

NCTE is the National Council of Teachers of English. While it sounds benign, this massive organization that affects millions of teachers all over the country—and helped write Common Core—has been politically far leftist for decades.

You may recall that Nabisco first enraged Christianists in 2012 with a Pride tweet displaying Oreos in rainbow colors.

We’re proud to celebrate inclusivity for all gender identities and expressions. In partnership with NCTE, we’re giving away special edition Pronoun Packs and encouraging everybody to share their pronouns with #Pride today and every day. pic.twitter.com/z91M2ubQ3k

There are only two sexes. Humans cannot change sex. I won’t be eating any more Oreos. Stop pandering.

Why don’t you stop politicizing children’s cookies, @Oreo ? We parents don’t want giant corporations telling us to teach our children crazy fads with no grammatical or scientific foundation.

Will never buy your product again. Pronouns are determined by sex. Stop pandering to a minority who use pronouns to bully others into denying reality

My children love oreos but I do the grocery shopping in my household. I suspect women do the shopping in at least 50% of homes. This ideology wants to eradicate women and women’s sex based rights. Be careful who you piss off, Nabisco. I will no longer buy your products.