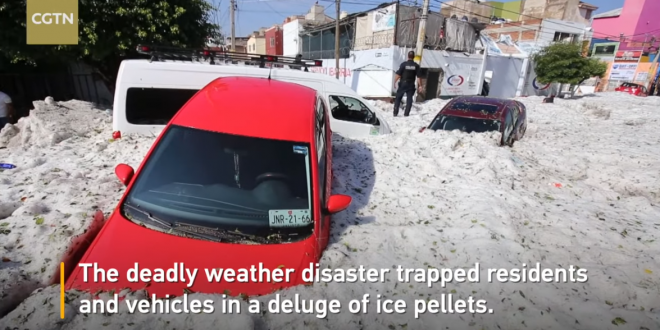 It’s summer in Guadalajara, one of Mexico’s most populous towns, which made what happened there over the weekend all the more surprising. Sunday morning, residents woke to their roads, yards and even cars buried under more than three feet of icy slush from a freak hailstorm that had blanketed the city.

Jalisco Gov. Enrique Alfaro said Civil Protection personnel quickly began cleanup, digging vehicles out from beneath the sea of hail and pumping out floodwaters once it had started to melt.

“I’ve never seen such scenes in Guadalajara,” Alfaro told AFP. “Then we ask ourselves if climate change is real. These are never-before-seen natural phenomenons,” he said. “It’s incredible.”

Guadalajara, located north of Mexico City and with a population of around five million, has been experiencing summer temperature of around 31 Centigrade (88 Fahrenheit) in recent days.

While seasonal hail storms do occur, there is no record of anything so heavy. At least six neighborhoods in the city outskirts woke up to ice pellets up to two meters deep.

Nearly 200 homes and businesses reported hail damage, and at least 50 vehicles were swept away by the deluge of ice in hilly areas, some buried under piles of pellets.

Wowzers … Six suburbs in the Mexican city of Guadalajara have been left carpeted in a thick layer of ice after a heavy hail storm. The ice was up to 5ft thick in places, half-burying vehicles pic.twitter.com/ec3UJ4K6Zl