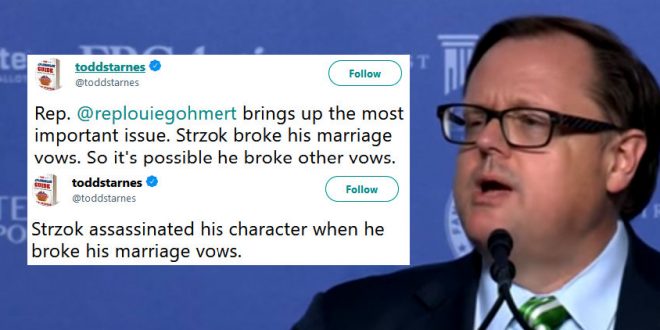 Yesterday afternoon loony GOP Rep. Louie Gohmert tore into FBI agent Peter Strzok about having cheated on his wife, drawing shouts of outrage from Democrats on the committee. Canned ham spokesmodel Todd Starnes endorsed Gohmert’s attacks, declaring that somebody who commits adultery is essentially untrustworthy in all other aspects of their life. Twitter users reacted exactly as you would expect them to do. Only a few examples are below.

Rep. @replouiegohmert brings up the most important issue. Strzok broke his marriage vows. So it’s possible he broke other vows.

Strzok assassinated his character when he broke his marriage vows.

Your boy louie and your entire party are hypocrites too. You guys save the pearl clutching for everyone except the leader of your party who cheated on his pregnant wife multiple times and left his first wife for the second. Gimme a break. https://t.co/iunRIu9cAU