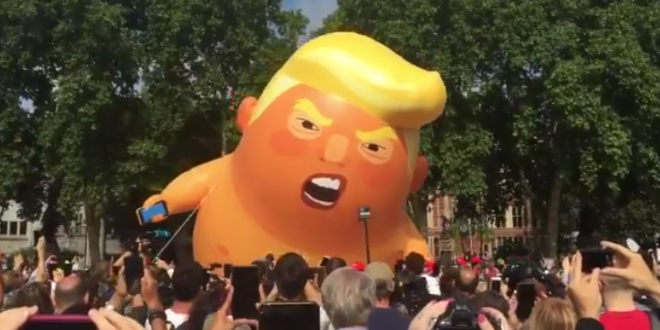 The most anticipated installment of Britain’s “Stop Trump” protests — a giant orange balloon of President Trump depicted as a pouting baby in a diaper and holding a smartphone — took flight on Friday from Parliament Square in London.

As if they were waiting for a rocket launch, dozens of excited people — including activists, tourists, children and bystanders taking time out from their commutes — gathered around the 19-foot balloon and counted down from 10 before it was released into the air.

“This is a victory,” said Leo Murray, an activist and the creator of the balloon. “People love it, he hates it, and it’s driven him out of London.” Thousands of demonstrators are preparing for a national rally in London at 2 p.m. to protest Mr. Trump’s policies.

Lift off: #Trumpbaby balloon lifts off in London as crowds gather to protest the U.S. president’s visit to Britain https://t.co/D9OBerUmha #TrumpVisitUK pic.twitter.com/0NWPpifBei

The people handling the blimp are ‘Trump Babysitters’

The Trump blimp is airborne over Westminster. pic.twitter.com/TfcVjIaYiW

AND WE ARE GO!!! Bit of a slower ascent than expected but #TrumpBaby is airborne pic.twitter.com/aY0dJ6teks