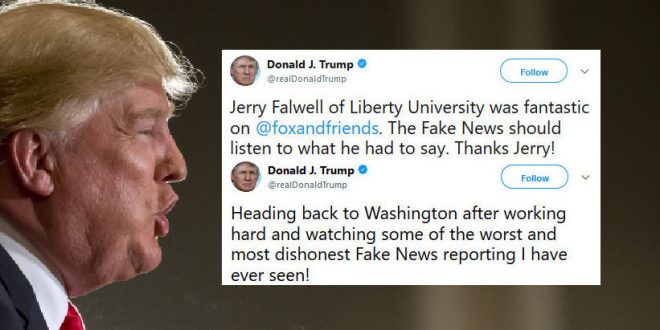 Meanwhile this is happening on Falwell’s home turf:

Liberty University graduates are calling on fellow alumni to take a stand against by returning their diplomas. They are also writing letters to Falwell’s office and to the Board of Trustees, calling for his removal. More than 260 people have joined a Facebook group titled “Return your diploma to LU.”

By publicly “revoking all ties, all support present and future,” the graduates hope to send a message to the school that “could jeopardize future enrollment, finances and funding,” according to the Facebook group. They are urging graduates to return their diplomas to Falwell’s office by Sept. 5.

In addition, several alumni have written letter to university officials calling on Falwell to disavow Trump’s statements, NPR reported. In it, the graduates said Falwell’s characterization of Trump’s remarks were “incompatible with Liberty University’s stated values, and incompatible with a Christian witness.”

Heading back to Washington after working hard and watching some of the worst and most dishonest Fake News reporting I have ever seen!

Jerry Falwell of Liberty University was fantastic on @foxandfriends. The Fake News should listen to what he had to say. Thanks Jerry!

Thank you, the very dishonest Fake News Media is out of control! https://t.co/8J7y900VGK

With other Republicans refusing to defend Trump, president relying on Jerry Falwell as his chief surrogate. https://t.co/VmkVQ0sWz0

Trump in July: "I have very little time for watching T.V."

Trump in August: Jerry Falwell "was fantastic on Fox and Friends." pic.twitter.com/vaFY0A9EBs