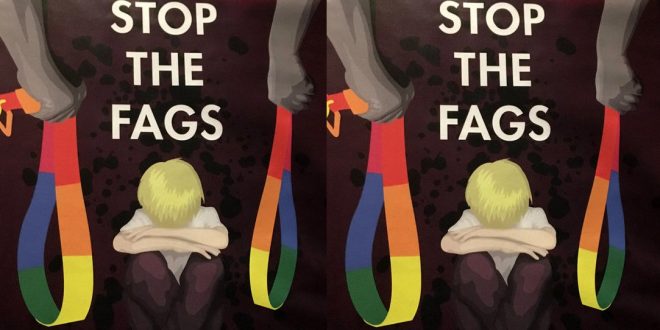 Materials labeling homosexuality a “curse of death” and claiming 92% of children of gay parents suffer abuse have surfaced in two separate incidents of homophobic campaigns against same-sex marriage.

Advocates have condemned the material, which included a poster urging Australians to “stop the fags” in Melbourne and a leaflet printed in English and Mandarin found in Hurstville, Sydney. The posters, found in Heffernan Lane in the Melbourne CBD, claimed that children of gay parents are disproportionately abused, suffer depression and are obese.

The vast majority of studies show children with LGBTI parents are no worse off than those with heterosexual parents, including a survey of academic literature by the Australian Institute of Family Studies. The poster depicts two figures menacing a blond child with rainbow belts.

“Labor opposed this postal survey because we feared exactly this kind of hurtful filth would emerge,” Mr Shorten posted on Facebook. “This kind of garbage isn’t ‘debate’, it’s abuse. I’m so sorry that LGBTI Australians have to put up with it. Let’s make sure there’s an overwhelming ‘Yes’ vote in response.”

Those “belts” also look like nooses to me. The posters have been traced back to a neo-Nazis message board.

Stop the fags? How about the conservatives start the respectful debate they were going on about? #auspol #plebiscite #voteyes #loveislove pic.twitter.com/3KvDn4oLQO