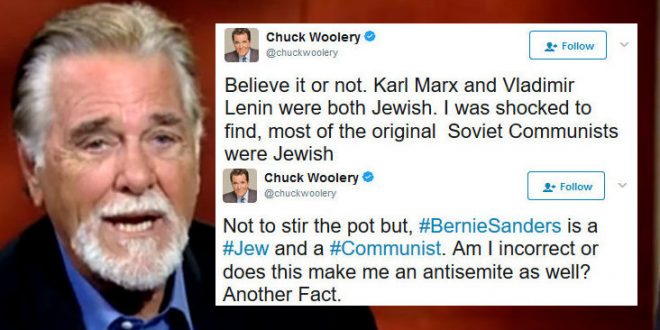 Chuck Woolery, the well-coiffed former Wheel of Fortune and Love Connection host, has recently complained that his right-wing views have prevented him from finding work in Hollywood. His foray, via Twitter, into the complex relationship between the European Jewish diaspora, German philosophy and the rise of socialism in 20th century Russia is unlikely to have Burbank’s best producers rushing to their phones.

It is unclear why Woolery chose Memorial Day to expound on his theories about Judaism and socialism. Those theories, such as they are, are neither new nor correct. Karl Marx, the principal author of The Communist Manifesto, was Jewish, but his forebears’ religion played no known role in the formation of his world-changing theories of history, social organization and the interactions between capital and labor.

In 1942, the historian Solomon F. Bloom wrote that “Antisemitic enemies of Marxism have naturally made the most of the Jewish origin and ancestry of its principal leader in order to confound at one blow both Judaism and socialism.” It looks as if Woolery borrowed from this very playbook.

Woolery has previously appeared on JMG for his anti-LGBT rants, which is more than ironic since nobody in the world would even know his fucking name if a gay man, Merv Griffin, hadn’t given him his first game show gig.

Believe it or not. Karl Marx and Vladimir Lenin were both Jewish. I was shocked to find, most of the original Soviet Communists were Jewish

I am an Islamophob,I am against SocialistLiberalProgressiveism.I am against Communism, But I am not an antisemite by any means. So stick it

I love it when all the #LiberalDemocrats spew their hate. They don't even have to identify themselves. You know them by their HATE & FEAR.

Not to stir the pot but, #BernieSanders is a #Jew and a #Communist. Am I incorrect or does this make me an antisemite as well? Another Fact.