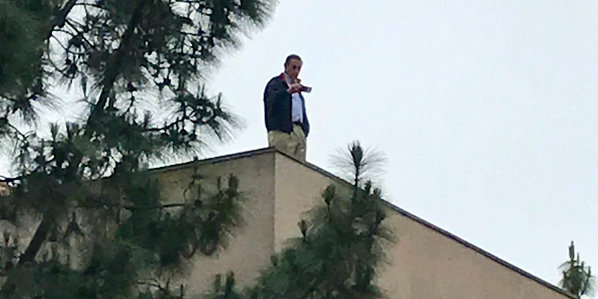 CALIFORNIA: GOP Rep. Darryl Issa Flees To His Roof Rather Than Face Hundreds Of Angry Constituents

Rep. Darrell Issa (R-Calif.) stood on the roof of his district office in California on Tuesday as his protesting constituents gathered outside the building. Per Politico’s Jake Sherman, Issa was reportedly filming the protesters below as he looked on from his rooftop perch.

Mike Levin, Issa’s Democratic opponent in the 2018 congressional race, tweeted both the rooftop picture and a photo of Issa talking to the “several hundred” gathered in front of his office. Levin claimed Issa “came out for 5 minutes but refused to engage with those across the street.” It wasn’t clear whether this happened before or after Issa decided to retreat to the roof.

Yes, this is really @DarrellIssa on the roof of his district office building. Too afraid to come speak with assembled constituents below. pic.twitter.com/wCYRjO8Ev8

So this is what it's come to

Snowflake Republican Darrell Issa Hides On A Roof To Because He Is Too Afraid To Face People Angry About Trumpcare https://t.co/xhJwpQyOtm

The fuck is our government?