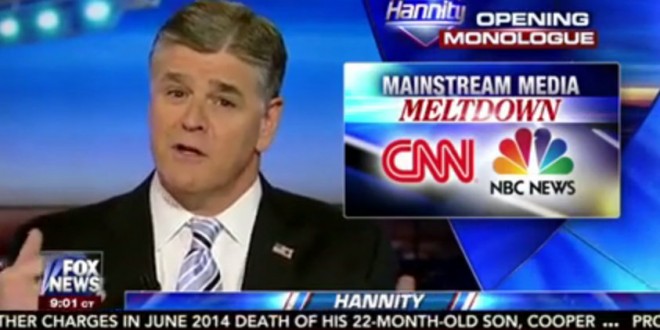 Sean Hannity opened his show by singling out two media figures in particular he thinks are most emblematic of anti-Donald Trump liberal media bias. Hannity first honed in on CNN’s Brian Stelter––who he’s feuded with in the past––and called him “arguably the most biased offender toward President-elect Trump.”

He was talking in particular about Stelter’s use of the word “authoritarian” and his comments about how different Trump’s lies are. Hannity called it a “smear,” said “CNN is not a real news network,” and wondered if he would ever report on “collusion” between CNN and the Clinton campaign. (For the record, Stelter has reported on the issue.)

Hannity also moved on to Chuck Todd and blasted him for not caring that Trump saved those hundreds of Carrier jobs. This was in response to Todd pressing Mike Pence on how there will be jobs that still end up going to Mexico.