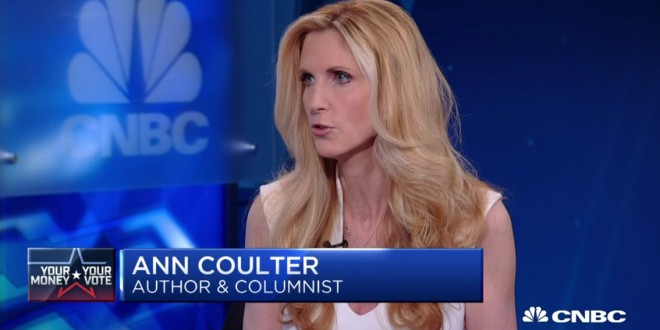 Coulter: Trump Saved My Life Because Otherwise Terrorists Would Have Killed Me At That Paris Concert

“I hated them [other GOP candidates] all. And in fact, I think Trump saved my life, because looking at that field of candidates, I mean, I was hoping that Mitt Romney was going to get in. He was the best on immigration and, you know, a respectable person. He was good on China and their currency manipulation, and he was the best that we have ever had until Trump. But without him in the race, I just thought, ‘I can’t do this. I can’t defend any of these guys. I am not going to go on TV and pretend that any of them are going to be better than any Democrat.’ And you know, I have always wanted to learn French, so I figured that I would just go to France for 2016 and skip the election year, hang out, learn French. And I happen to love Eagles of Death Metal, so I totally would have been at that concert, except Trump ran so I couldn’t leave.” – Ann Coulter, speaking to Vanity Fair.

Previous Trump To The Terminally Ill: I Don’t Care How Sick You Are, Just Don’t Die Before You Vote For Me [VIDEO]
Next Hamilton’s Schuyler Sisters Say Vote [VIDEO]