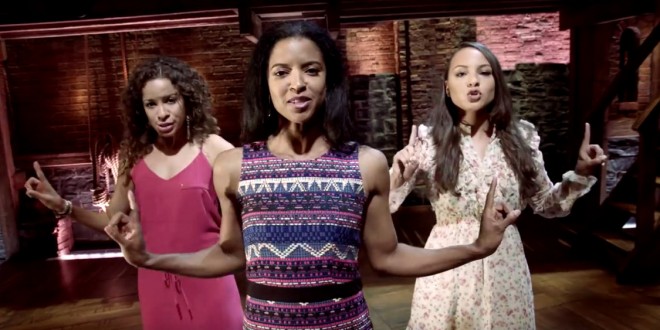 With lyrics, music and direction by Lin-Manuel Miranda, a new public service ad campaign has been launched urging everyone to vote in the upcoming November 8th elections. The campaign consists of three spots (two English and one in Spanish) featuring music from the song titled “Schuyler Sisters” in the Hamilton Broadway production.

“As the nation gears for one of the most decisive elections in its history, we are proud to highlight the importance and power of democracy in building a nation.  For most Americans, the room where it happens is the voting booth.  So take a little time on November 8th to cast your vote as our way to change the nation”, Miranda said.

I love how they left in “And Peggy!” from the show. President Obama appears in the second clip below.

Previous Coulter: Trump Saved My Life Because Otherwise Terrorists Would Have Killed Me At That Paris Concert
Next QUISLINGS: Log Cabin Republicans Endorse Homocons Paul Babeu And Clay Cope For The US House