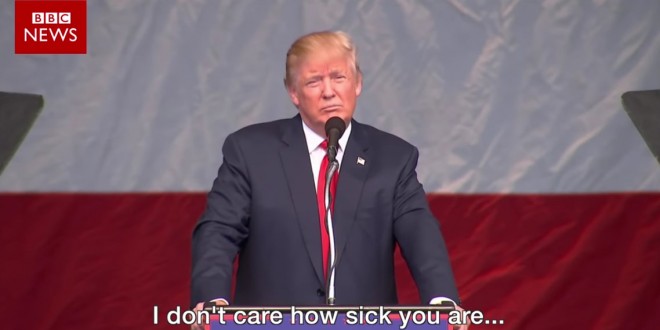 Trump To The Terminally Ill: I Don’t Care How Sick You Are, Just Don’t Die Before You Vote For Me [VIDEO]

Republican presidential candidate Donald Trump called on the terminally ill Wednesday to “hang out till November” so they can vote for him in the election against his rival Hillary Clinton.

“I don’t care how sick you are,” the Republican nominee said. “I don’t care if you just came back from the doctor and he gave you the worst possible prognosis, meaning it’s over. Doesn’t matter. Hang out till November 8. Get out and vote.”

He continued: “And then, all we’re gonna say is, ‘We love you and we will remember you always.’ Get out and vote.”

Trump, after narrowing the gap in the polls with Clinton, is now seeing the distance between them widen after the first debate in which he was criticized for talking over his counterpart and making a series of erroneous statements.

Previous Alex Jones: Vote Donald Trump If You Want To Live Because Hillary Is Possessed By The Devil [VIDEO]
Next Coulter: Trump Saved My Life Because Otherwise Terrorists Would Have Killed Me At That Paris Concert