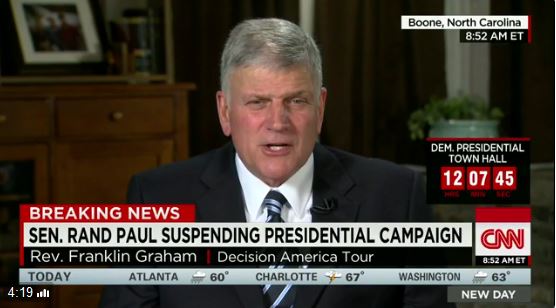 Franklin Graham Still Has The Obergefell Sadz: We Need A National Referendum On Gay Marriage [VIDEO]

Franklin Graham appeared on CNN today where he declared that the US government has only been secular for “the last few years.” He then called for a national referendum on same-sex marriage. Franklin is on a 50-state tour where he is commanding evangelicals to only vote for “bible-believing Christians.” More from Raw Story:

The reverend warned that the nation is “only going to be fixed if the American people turn from their sins and put their faith and trust in almighty God.”

“I believe the Bible is the word of God from cover to cover, and I believe every word of it is true,” Graham noted. “And I hope people will vote for candidates that live the word of God.”

CNN host Chris Cuomo wondered what that meant for Christian candidates who “respect the law of the land” that protects the rights of LGBT couples to get married.

“You talk about us being a secular government, a secular society — that’s only taken place in the last few years,” Graham opined. “Our nation was founded on biblical principles. Our founding fathers recognized God. All you have to do is go to Washington and look at all of our monuments with the inscriptions and references to almighty God.”

“We know that the Christian faith is not the rule for all,” Cuomo interrupted. “Under the Constitution, you don’t see God mentioned until the signature page.”