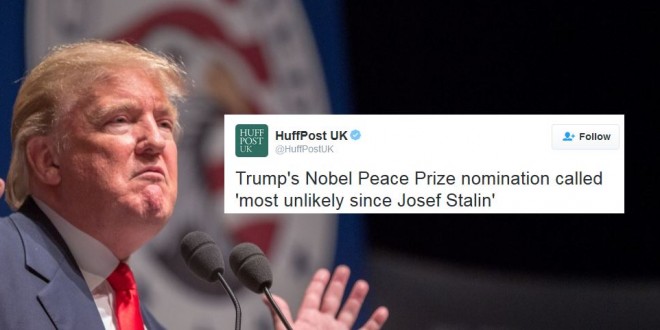 Who do you think it was? Britain’s Telegraph reports:

An anonymous US politician has put forward Republican presidential candidate Donald Trump for the Nobel Peace Prize in one of the most unlikely nominations since that of Soviet strongman Josef Stalin in 1947. The nominator, likely to be a Republican senator or congressman — both of whom are eligible — submitted the nomination only days before the deadline of February 1.

Kristian Berg Harpviken, director of Oslo’s Peace Research Institute, which publishes an annual prediction of the likely prize-winner, confirmed to the Telegraph that he had been sent a copy of the Trump nomination letter last week.

Among the more likely-to-win nominees are Edward Snowden and Pope Francis.