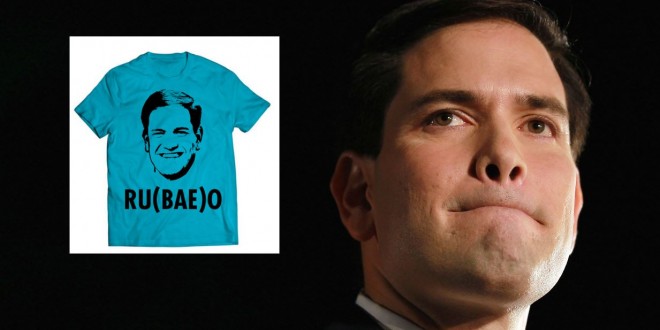 At least that’s what he seems to be saying with a new campaign t-shirt. The Verge chortles:

Marco Rubio is young and beautiful. Marco Rubio’s campaign would like you to know it. To that point, the campaign has started selling “Marco Ru(bae)o” T-shirts, which are electric blue, made in America, and require “extra time for delivery due to high demand.”

If you recall, “bae” is a pet name for a significant other that came into popular usage, was abused terribly, went through an ironic period, and then was phased out of use by all but the most thirsty of brands and white of moms.

“lmao, marco rubio was so unwoke he didn’t even know he was bae ” But at one point it was used by young people, and Marco Rubio is understandably interested in letting those young people know that he exists, and is also young.

Thirty bucks for the shirt. “Please allow extra time for delivery due to high demand.”