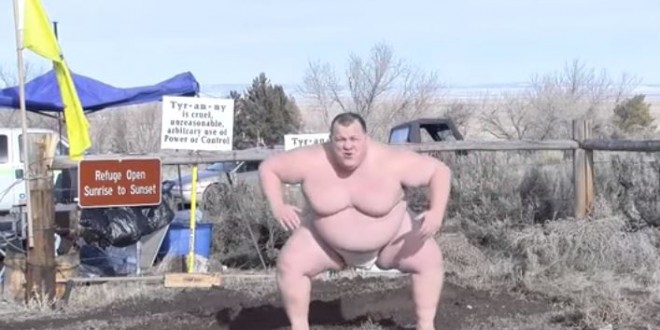 It’s Day 24 of the Malheur National Wildlife Refuge standoff near Burns. Just how bored are the armed militants occupying the property’s gift shop/office building? One of the more broad-in-the-beam “patriots” has posted a YouTube video with a bizarro challenge to New Jersey Gov. Chris Christie: Come to Oregon and battle him in 10 sumo rounds.

If Christie can win just one of the rounds, Idaho-based occupier Kelly Gneiting says the “militia” will end the standoff and walk away. In the three-minute video, Gneiting, dressed only in a sumo loincloth, calls Christie his “little brother” and slaps his bare, pink skin as a yellow “Don’t Tread on Me” flag dances in the cold eastern Oregon wind.

Christie has yet to respond.