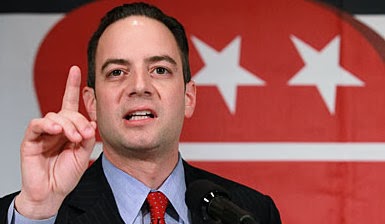 Republican National Committee Chairman Reince Priebus has issued a call for a boycott of MSNBC over yesterday’s tweet which suggested that “right wingers” would hate the biracial family featured in a new Cheerios commercial. The tweet was deleted almost immediately and was followed by two tweeted apologies. Via Breitbart:

“Until you personally and publicly apologize for this behavior, I have banned all RNC staff from appearing on, associating with, or booking any RNC surrogates on MSNBC. I have asked Republican surrogates and officials to follow our lead,” Priebus told MSNBC President Phil Griffin in a letter sent today. Priebus also sent a memo to Republican officials and surrogates urging them not to appear on the network until Griffin apologizes. “This is more than just a tweet or an offhand comment. This is part of a pattern of behavior that has gotten markedly worse, and until Phil Griffin personally apologizes and takes corrective action, we cannot be part of this network’s toxic programming,” Priebus said. “MSNBC hosts—including Alec Baldwin, Martin Bashir, Melissa Harris-Perry, Alex Wagner, and Ronan Farrow just to name a few—have had a troubling streak in the last several weeks of making comments that belittle and demean Americans without furthering any thoughtful dialogue. Perhaps it’s time for the executives at MSNBC to consider whether their network is upholding a meaningful journalistic mission,” the Wisconsin Republican added.

As I noted in my post about this nonsense earlier today, neither Breitbart nor Preibus seem to remember that General Mills had to block commenting on the last Cheerios commercial because of the thousands of racist comments being made by God’s Gentle People. Many of those comments mocked President Obama for being biracial himself.

UPDATE: MSNBC has issued another apology and fired their Twitter person.  From MSNBC president Phil Griffin, here is the apology that was read on the air this afternoon.

“The tweet last night was outrageous and unacceptable. We immediately acknowledged it was offensive and wrong, apologized and deleted it. We have dismissed the person responsible for the tweet. I personally apologize to Mr. Priebus and to everyone offended. At MSNBC, we believe in passionate, strong debate about the issues, and we invite voices from all sides to participate. That will never change. Signed, Phil Griffin.”