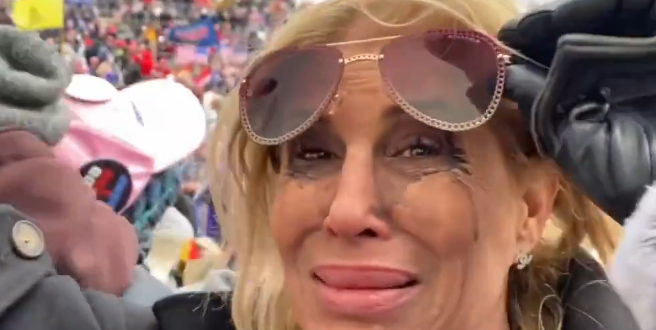 The Beverly Hills salon owner whose tear-streaked face became a lasting image from the Jan. 6 attack on the U.S. Capitol is trying to claw back part of her guilty plea.

“You are not going to take our Trumpy Bear!” Gina Bisignano memorably shouted through a bullhorn as her fellow Donald Trump supporters closed in on the Capitol building. “This is 1776! And we the people will never give up,” she also said. “We will never let our country go to the globalists.”

Bisignano admitted to helping multiple rioters smash a glass window to the Capitol and then crawling through it to enter the building. She is specifically asking to withdraw her plea to a single felony count of obstructing an official proceeding.

Bisignano, who had appeared on JMG before the riot for screaming anti-gay abuse during an anti-lockdown protest (video below), is now claiming, among other things, that her guilty plea was not “was not knowing and/or voluntary” because she didn’t understand the law she was charged with violating. And she didn’t do it anyway.

‘The Government Bullied Her’: Beverly Hills Beautician Tries to Withdraw Guilty Plea, Says She Didn’t Actually Do What She Admitted She Didhttps://t.co/tRaeXVaIeY

Previous Logan Wants To Form Foundation For “Real Journalists”
Next Televangelist: A “Demonized” Old Lady Screamed At Me