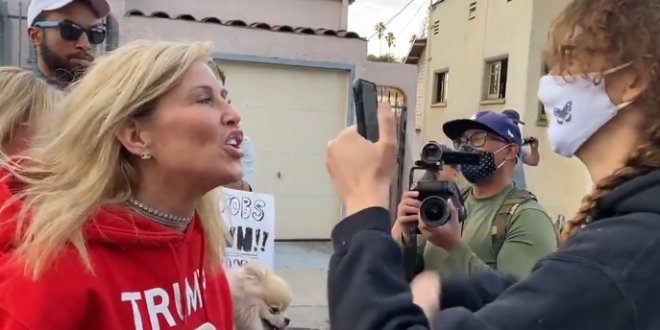 On Sunday a group of about 50 protesters gathered outside the Echo Park home of Los Angeles County Department of Public Health Director Barbara Ferrer to denounce the county’s latest coronavirus restrictions, and neighbors came out to defy them.

At the demonstration a woman named Gina Michelle Bisignano, who was wearing a Trump-supporting sweater, got into a verbal dispute with one anti-protester and dropped offensive homophobic slurs.

“You’re a faggot. You’re disgusting. You’re a new world order Satanist. And you guys are all for it. You’re a faggot. What are you a guy or a girl? And I’m gonna tell you something else. You’re a Nazi and you’re brainwashed by MK Ultra. You’re such a liberal piece of shit. I bet you had an abortion this morning.”

Some hostility between neighbors and protesters. One protester calls a neighbor “disgusting” and a “new world order satanist.” She later uses a homosexual slur at the neighbor. pic.twitter.com/EMtj7dSsKL