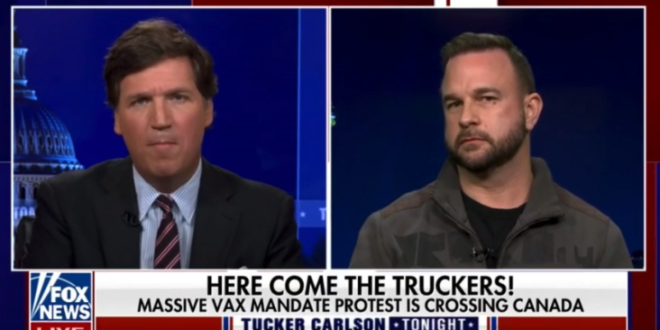 Benjamin Dichter, a failed candidate for both the Conservative Party and People’s Party, participated in a Twitter Space discussion with a pair of highly controversial former Rebel Media personalities – Keean Bexte and Lauren Southern.

During a Twitter Space chat, Dichter was asked about photos circulating of hate symbols at the convoy, including multiple Confederate flags and flags displaying Nazi swastikas. While Dichter claimed the swastika was a false flag operation carried out by the federal government, he did not condemn the confederate flag.

At no point during the half-hour conversation with Bexte and Southern did Dichter challenge the legitimacy of the Confederate flag — a symbol of support for slavery. Multiple flags bearing Nazi swastikas were spotted over the weekend.

Dichter appeared on Tucker Carlson’s show last week. Carlson called him “inspiring and brave” and Dichter called Carlson “a hero to all of us.”

Lauren Southern last appeared on JMG in 2019 when Trump retweeted her after she had been banned from entering Britain under anti-racism laws.

“Let’s assume there were people who do have a Confederate flag … I don’t care … I want to hear unacceptable opinions.”https://t.co/o2VDUeZPOU #cdnpoli #ottnews

Previous Trudeau Blasts Anti-Vaxxers For “Threats, Violence, Hatred” And “Stealing Food From Homeless” [VIDEO]
Next Alleged Militia Member Seeks Permission To Move To Texas: Employers Are “More Sympathetic” To Me There