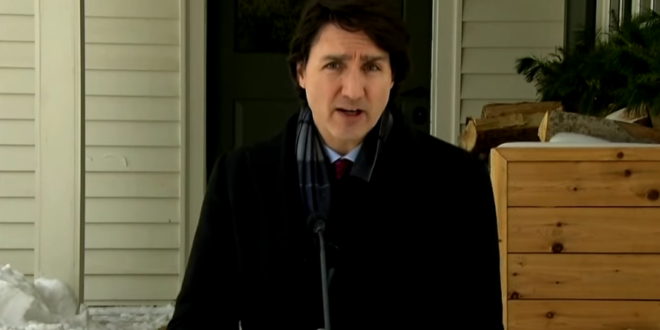 Prime Minister Justin Trudeau on Monday said Canadians were disgusted by the behavior of some people protesting against COVID-19 vaccine mandates in Ottawa and said he would not be intimidated. Police said most demonstrators have been peaceful but local residents complained about blaring truck horns and some demonstrators using the streets as a toilet. Some also harassed a homeless shelter and demanded staff give them food – the shelter said on Twitter – while others flew Nazi flags.

“We are not intimated by those who hurl abuse at small business workers and steal food from the homeless,” Trudeau told a news conference. “We won’t cave to those who engage in vandalism. There is no place in our country for threats, violence, or hatred.” Senior members of the official opposition Conservative Party, which last year lost its third consecutive election to Trudeau’s Liberals, praised the demonstrators.

And check out Fox’s stupid headline. Trudeau has been in quarantine and tested positive for COVID today.