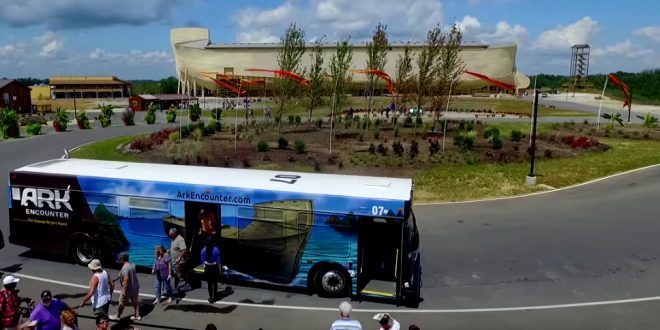 A Bible-themed attraction in Kentucky that features a 510-foot-long wooden Noah’s ark is planning to begin fundraising for an expansion. The Ark Encounter said Wednesday that it would take about three years to research, plan and build a “Tower of Babel” attraction on the park’s grounds in Northern Kentucky.

A release from the Ark Encounter park said the new attraction will “tackle the racism issue” by helping visitors “understand how genetics research and the Bible confirm the origin of all people groups around the world.” No other details were given on the Babel attraction or what it might look like.

Read the full article. The Ark Encounter last appeared on JMG when they launched a virtual reality exhibit showing how God drowned millions of sinners because he loved them so fucking much. Before that we heard from them when they sued their insurer for refusing to cover rain damage. The Ark Encounter opened thanks to massive tax breaks which will never be recovered.

Previous Ingraham: Hide Your Kids From “Vaccine Pushers”
Next GOP Senator: Taylor Swift Would Be The First Victim Of Socialism Because Marxists Don’t Allow Women To Sing