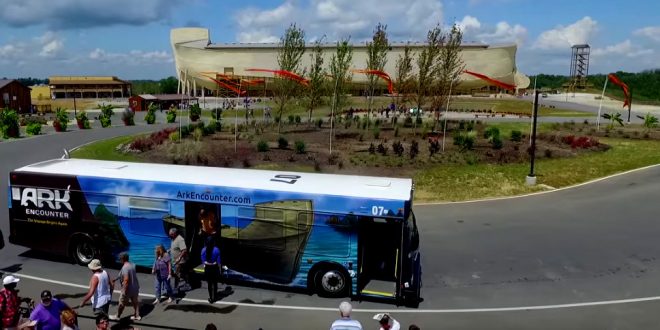 Not The Onion: Ark Encounter Sues Over Rain Damage

The owner of the life-size replica of Noah’s Ark in Northern Kentucky has sued its insurers for refusing to cover, of all things … rain damage. Ark Encounter, which unveiled the 510-foot-long model in 2016, says that heavy rains in 2017 and 2018 caused a landslide on its access road, and its five insurance carriers refused to cover nearly $1 million in damages.

In a 77-page lawsuit filed in U.S. District Court, Ark Encounter asks for compensatory and punitive damages. The ark itself was not damaged and the road has been rebuilt, according to the suit. Noah’s Ark is the vessel in the Genesis flood narrative through which God spares Noah, his family and two of each of the world’s animals from a world-engulfing flood.

Engineers fixed the roadway at a cost of about $1 million. But when the Ark Encounter asked for their insurance to cover the repairs, they were disappointed.

Initially, the suit alleges, the defendants cited faulty craftsmanship as the reason for the property damage and stated they were not liable. After an appeal, they conceded that only a small amount was covered by the policy.

“By refusing to pay all but a very small proportion of Plaintiffs’ covered claim, the Defendants have failed to meet their Policy obligations and failed to handle Plaintiffs’ claim properly and in good faith, causing Plaintiffs to incur significant additional loss and expense,” reads the suit.