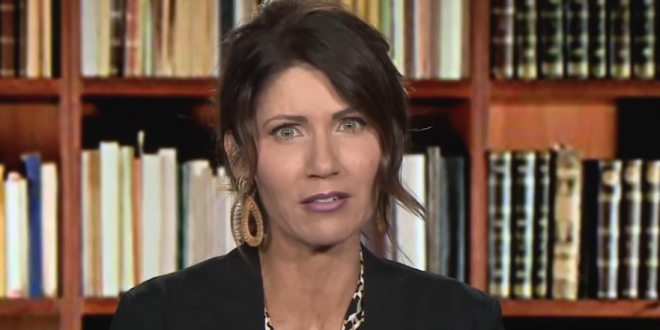 South Dakota Gov. Kristi Noem (R) will gladhand with Republican donors at President Trump’s Mar-a-Lago resort next month amid speculation that she plans to run for president in 2024. A source familiar with the matter confirmed to The Hill that Donald Trump Jr. and his girlfriend Kimberly Guilfoyle will host the fundraiser for Noem’s gubernatorial campaign on March 5 at the Palm Beach resort.

Noem is up for reelection in 2022 but is rumored to be among the Republicans mulling a White House bid in 2024.She is scheduled to give a speech this weekend at the Conservative Policy Action Conference in Orlando and is reportedly slated to attend a Republican National Committee donor retreat in April, both of which are important stops for potential presidential contenders.

As leading Republicans debate how closely to tie the party to Donald Trump, likely 2024 hopeful Kristi Noem has already picked a side.