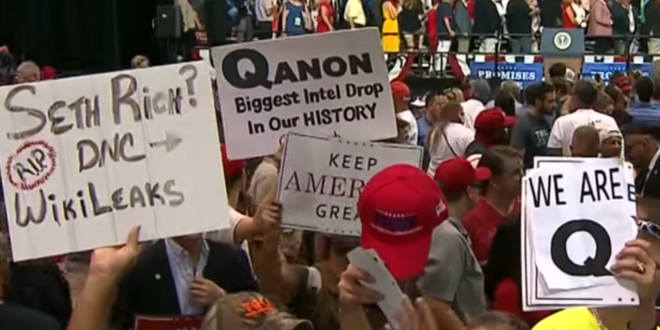 QAnon Extremists Are Having An Extremely Bad Day

Followers of the extremist ideology QAnon saw their hopes once again dashed Wednesday as President Trump left Washington on the final day of his presidency, without any of the climactic scenes of violence and salvation that the sprawling set of conspiracy theories had preached for years would come.

As Trump boarded Air Force One for his last presidential flight to Florida, many QAnon adherents — some of whom had earlier this month stormed the Capitol in a siege that left at least two QAnon devotees dead and others in jail — began to wonder whether they’d been duped all along.

When one QAnon channel on the chat app Telegram posted a new theory that suggested Biden himself was “part of the plan,” a number of followers shifted into open rebellion: “This will never happen”; “Just stfu already!” “It’s over. It is sadly, sadly over.” “What a fraud!”

“History has taught us far-right movements don’t cool off during a Democratic administration,” [Travis] View said. “The people who stick with it are going to become even more radicalized and potentially more dangerous.” https://t.co/7Bw2FYgsve

“A lot of YouTube journalists have just lost one hell of a lot of credibility” :/ https://t.co/A10ZDZHTbw

QAnon MAGA struggling today as they realize “The Storm” isn’t coming and it was all BS.

“All my family and co-workers think I’m crazy,” wrote another.

Ron Watkins, son of 8kun owner Jim Watkins & a QAnon influencer himself, told adherents on Telegram “we have a new president sworn in and it is our responsibility as citizens to respect the Constitution…”

Public QAnon groups on Telegram are currently being overrun by trolls relentlessly making fun of them and posting swastikas. Because Telegram just be that way.