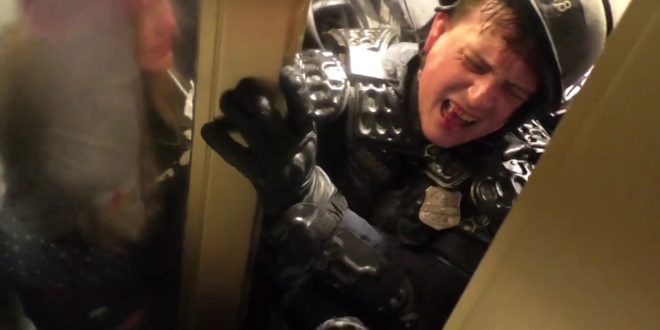 A 23-year old man from Ridgefield has accused of being part of a group that violently assaulted a police officer during what federal authorities describe as a coordinated effort to break through one of the U.S. Capitol entrances during the violent attack on the Congress on January 6.

Patrick Edward McCaughey III is accused of being at the front of a mob that stormed the Capitol and bloodied Metropolitan police officer Daniel Hodges, who had been called to the Capitol to support the U.S. Capitol Police, who were being overwhelmed by rioters.

🚨BREAKING: The @FBI has ARRESTED Patrick Edward McCaughey in NY and CHARGED him with assault on a police officer and other federal charges related to the #TrumpInsurrection.

He’s accused of squeezing Officer Hodges with a riot shield in the Capitol.

Previous QAnon Extremists Are Having An Extremely Bad Day
Next Left Off Trump’s Pardon List, Texas AG Vows To Fight Biden’s “Many Unconstitutional And Illegal Actions”