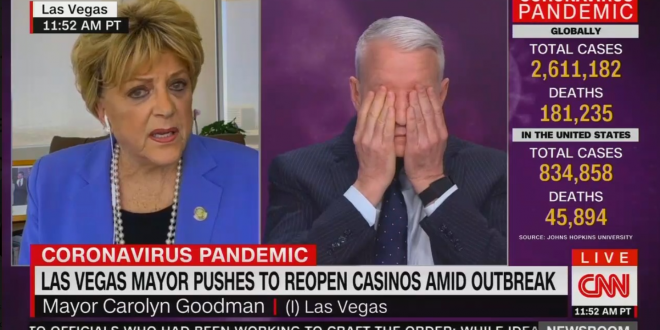 Las Vegas Mayor Carolyn Goodman appeared on CNN, Wednesday, for a trainwreck of an interview during which she called for casinos and hotels to be reopened, argued there have been viruses in Vegas “for years,” and engaged in a constant battle with Cooper who described her positions as “ignorant.”

As the interview started, host Anderson Cooper asked Goodman, “You assume everyone has the virus is just asymptomatic. You want casinos open, Vegas back in business. Is that a responsible call to make?”

“That wasn’t the call that I was really making,” Goodman shot back. “It was to get people back to work. We have so many in our hospitality crew. We’re two-and-a-half million people down here in southern Nevada and we have so many out of work.”

Las Vegas Mayor Carolyn Goodman on Wednesday repeatedly called for the city’s businesses to reopen while refusing to provide any social distancing guidelines on how to do so safely.

“I am not a private owner. That’s the competition in this country. The free enterprise and to be able to make sure that what you offer the public meets the needs of the public,” Goodman, an independent, told CNN’s Anderson Cooper.

“Right now, we’re in a crisis health-wise, and so for a restaurant to be open or a small boutique to be open, they better figure it out. That’s their job. That’s not the mayor’s job.”

Cooper didn’t have much more luck getting to the bottom of Goodman’s rationale, much less what she’s actively doing to keep her constituents safe beyond the governor’s stay-at-home order — which she called “insanity” in a local TV news interview on Tuesday.

The crux of the confusion came down to Cooper asking Goodman about what responsibility she has to keep casino patrons and employees safe. She insisted that competition, not government oversight, is the answer. The more Cooper pushed for factual information, the more the interview came undone.

At one point, Goodman seemed to indicate she would prefer taking the placebo instead in a potential trial for a coronavirus treatment, which left Cooper even more confused.

Las Vegas Mayor: It sounds like you’re being an alarmist! pic.twitter.com/meAlEMpntl

Cooper: Chinese researchers have shown how this virus spreads

Mayor: You are tough. This isn’t China, this is Las Vegas, Nevada.

Cooper: Casino owners are probably doing OK, it’s the people who are working on the floor who are the ones who are going to become infected and potentially die.