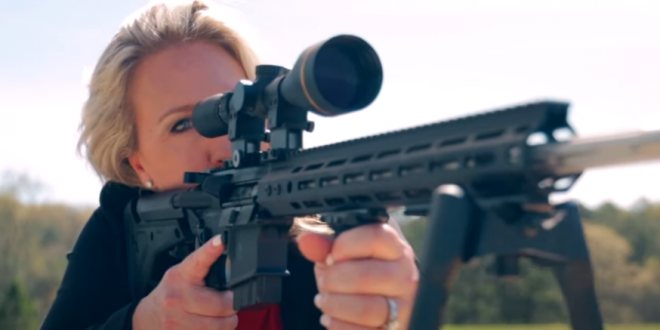 Many Republicans are campaigning against socialism this year, but a Georgia GOP congressional candidate took her message one step further. Marjorie Greene, a businesswoman running to represent Georgia’s 14th congressional seat, literally blew up a “socialism” sign with explosives to show she’s serious about stopping the far-left policies. Greene, who runs a family-owned construction company, is seeking an open seat to succeed the retiring GOP Rep. Tom Graves.

In her first TV ad that launched Tuesday on cable TV, Greene drives her Humvee out on an open field and shoots an AR-15 gun at tins that represent gun control, open borders and the Green New Deal — blowing each one up. Then in the grand finale, Greene, a mom of three who has the endorsement of Gun Owners of America, takes aim at a sign that says “socialism.” It explodes in dramatic fashion.

Tom Graves, who has called Obama a “dictator,” won reelection in 2018 by 53 points so there’s virtually no chance of flipping the seat sought by this gun freak.