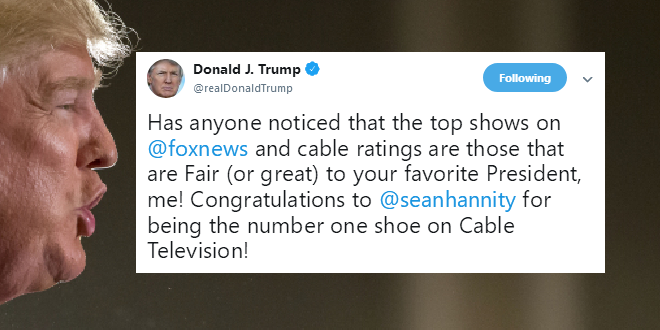 Trump: Suck Up To ME If You Want Good TV Ratings

The Chosen One began his weekend of “closely monitoring” Hurricane Dorian with a flurry of self-congratulatory retweets (31 at this writing) as well as renewed attacks on James Comey and Fox News. According to Glorious Leader, the only way to get good television ratings is to shove your entire head up his rear end, as Sean Hannity does on his “shoe” every night.

Has anyone noticed that the top shows on @foxnews and cable ratings are those that are Fair (or great) to your favorite President, me! Congratulations to @seanhannity for being the number one shoe on Cable Television!

“The IG found that James Comey leaked Classified Documents to his attorneys, which can be (is) a violation of the Espionage Act. This is consistent with all the lies that Comey has been spreading. @GreggJarrett @ByronYork @LouDobbs