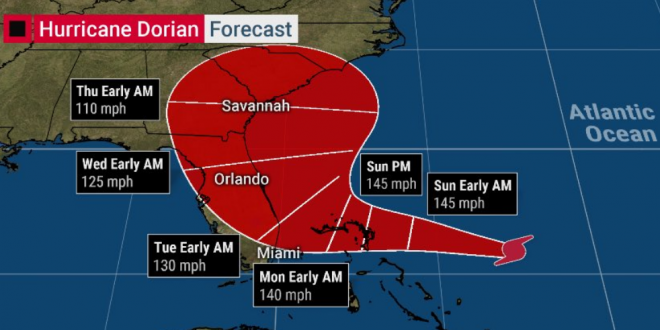 Hurricane Dorian’s forecast track continued its shift east Saturday morning, maintaining the threat to Florida’s east coast but increasing the chance the storm will spare Florida a direct hit. The 8 a.m. update from the National Hurricane Center, which showed the storm’s winds had strengthened to 145 miles per hour.

But the cone has been shifting seaward over the past 15 hours, with the center now remaining offshore and aimed at landfall in South Carolina. Forecasters warn that the margin for error remains significant and that most of Florida’s east coast remained at risk of a devastating strike from a Category 4 storm.

Orlando International Airport will shut down at 2 a.m. on Monday “out of an abundance of caution” as Hurricane Dorian makes its way toward Central Florida. Passengers with booked trips should check in with their airlines for flight information, officials said.

“Hurricane Dorian has strengthened and slowed,” Phil Brown, CEO of Greater Orlando Aviation Authority, said in a release. “Our plan currently is to run full operations through Sunday. We don’t know exactly where Dorian is going but we do know that it will have a significant impact on the entire state of Florida.”

Hurricane Dorian shifts track and is now expected to make landfall in the Carolinas. But Florida isn’t in the clear.https://t.co/MPijLBpc28 pic.twitter.com/GzXLUW15pl

New track for #Dorian from @NHC_Atlantic shifted! Remains off coast of FL! Better news for Floridians, still could see heavy rain, gusty winds but worst of surge could now pile up against the coast mid-late week GA, SC & NC. Position/strength of that high has been driving factor. pic.twitter.com/O1lXpbHOqC

Previous Trump Was Trump At African American History Museum
Next Trump: Suck Up To ME If You Want Good TV Ratings