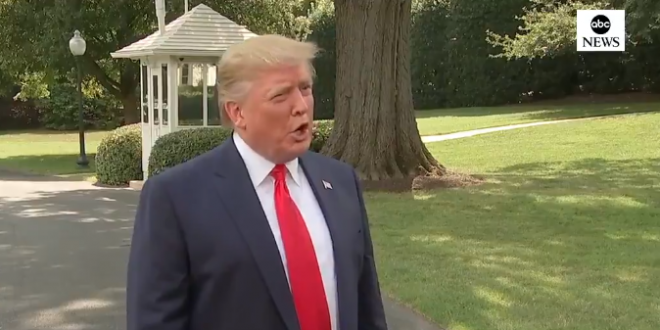 President Donald Trump on Tuesday warned his administration is “watching Google very closely” after Fox News and the Fox Business Network aired segments suggesting the technology giant harbors bias against him and is working to thwart his reelection prospects.

“It all sounded good until I watched Kevin Cernekee, a Google engineer, say terrible things about what they did in 2016 and that they want to ‘Make sure that Trump losses in 2020,’” he continued.

Cernekee, who was fired from Google in June 2018, appeared Monday morning on “Fox & Friends” and alleged executives at the company “went up onstage right away and cried — literal tears streaming down their faces” after Trump’s victory in the 2016 White House race.

Media Matters has the real story on this former Google staffer:

The Daily Caller reported that Cernekee had “suggested raising money under the auspices of the company’s free speech listserv for a bounty to identify Richard Spencer’s assailant.”

After Spencer, one of the nation’s most prominent white nationalists, was punched while giving an interview in January 2017, Cernekee suggested putting together a group donation to support the search for the puncher through racist troll Charles Johnson’s website.

Cernekee identified Spencer only as a “well known conservative activist.” When other Google employees pointed out that Spencer is “a prominent, vehement racist and anti­-Semite,” Cernekee defended him.

Hit the link above for much more about Trump’s latest alt-right hero.

.@sundarpichai of Google was in the Oval Office working very hard to explain how much he liked me, what a great job the Administration is doing, that Google was not involved with China’s military, that they didn’t help Crooked Hillary over me in the 2016 Election, & that they…

… are NOT planning to illegally subvert the 2020 Election despite all that has been said to the contrary. It all sounded good until I watched Kevin Cernekee, a Google engineer, say terrible things about what they did in 2016 and that they want to “Make sure that Trump losses…