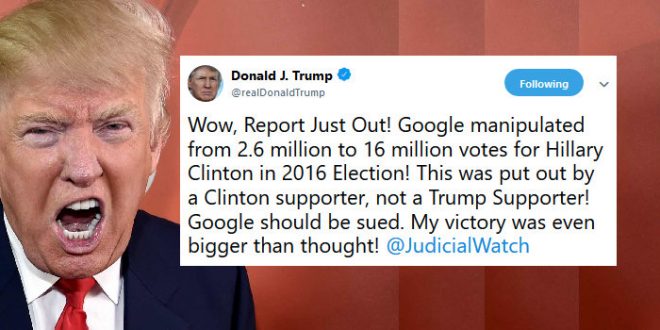 Donald Trump has accused Google of manipulating the 2016 US election in favour of his democratic rival Hillary Clinton, citing a conservative judicial activist site that frequently makes false accusations and spreads conspiracies against liberals.

Trump has regularly claimed that Clinton did not win the popular vote in 2016, even though official tallies showed she received roughly 3 million more votes despite losing the Electoral College.

In the past, the president has blamed his popular vote defeat on millions of “illegal” votes, although he has never produced any evidence that illegal votes cost him the popular vote.

Wow, Report Just Out! Google manipulated from 2.6 million to 16 million votes for Hillary Clinton in 2016 Election! This was put out by a Clinton supporter, not a Trump Supporter! Google should be sued. My victory was even bigger than thought! @JudicialWatch

Previous Steve King: The Media And GOP Owe Me An Apology
Next BREAKING: NYPD Fires Cop In Eric Garner’s Death