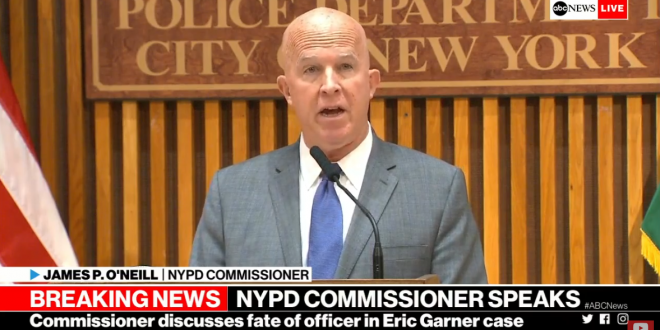 The administrative judge who oversaw the departmental trial of NYPD Officer Daniel Pantaleo blamed him for a “glaring dereliction of responsibility that precipitated a tragic outcome” – the death of Eric Garner.

The judge, Deputy Commissioner Rosemarie Maldonado recommended earlier this month that Pantaleo be dismissed from the NYPD after she found him guilty of recklessly causing Eric Garner physical injury, but not guilty of strangulation with intent to impede breathing. Judge Maldonado also said Pantaleo was “untruthful,” and “self-serving” during the course of the investigation.

“There is overwhelming evidence that Respondent. used a prohibited choke hold, as defined by the 2014 Patrol Guide,” Maldonado wrote in a 46-page decision, adding that Pantaleo’s denial that he used a chokehold was “both implausible and self-serving.”

Five years after Eric Garner’s dying plea “I can’t breathe” became the rallying cry against police brutality across the nation, the police officer who killed him has been fired, a senior law-enforcement official told The Daily Beast.

New York City Police Commissioner James O’Neill announced on Monday that NYPD officer Daniel Pantaleo has been fired, the official said. O’Neill terminated Pantaleo, 34, after it was determined he violated department policy by restraining Garner with a prohibited chokehold in 2014.

NYPD Officer Daniel Pantaleo has been fired by Commissioner James O’Neill. He says Pantaleo had the opportunity to let go of the chokehold he placed on Eric Garner, but decided not to. Garner died in large part from that chokehold July 17, 2014.