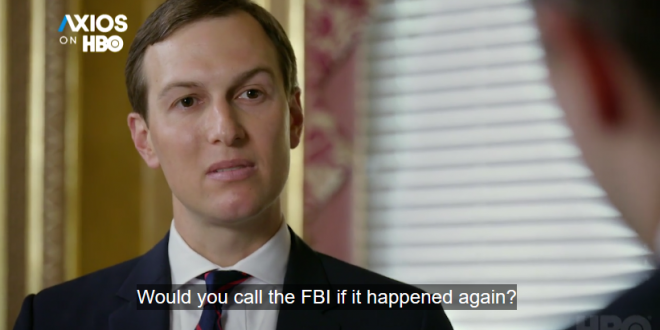 On “Axios on HBO,” Jared Kushner said he doesn’t know whether he’d call the FBI if he were to receive an email today like the one before the campaign’s Trump Tower meeting, which had the subject line: “Re: Russia – Clinton – private and confidential.”

Kushner is now in the West Wing as senior adviser to the president. Shouldn’t an email with an offer of help from Russians trigger a mental alarm? This bolsters the perception that President Trump’s inner circle still doesn’t fully recognize the ongoing threat of Russian interference in American elections.

Asked if he’d call the FBI if it happened again, Kushner said: “I don’t know. It’s hard to do hypotheticals, but the reality is is that we were not given anything that was salacious.”

Every answer Jared gave was somehow worse than the last one. https://t.co/GKUyX1DSeb

Perversely, despising every fiber of Jared’s rotten being might bring the country together.pic.twitter.com/iIohXz3ABQ

Although Donald Trump called Nazis fine people, said Obama was born in Africa, called Maxine “Low IQ”, didn’t rent apartments to POC in the 70’s, and put out a full page add to blame 5 black kids for a crime they didn’t do

Jared Kushner says he has never seen Trump being racist.

Jared Kushner on why the Palestinians would accept his Middle East peace plan:

“I’m not here to be trusted…They’re gonna judge it based on the facts and then make a determination. Do they think this will allow them to have a pathway to a better life or not?” @dctvny @hbodocs pic.twitter.com/JnpwsmWyM9

Please keep highlighting Jared Kushner’s incompetent Axios interview so his name keeps trending and Trump and Ivanka and the rest of the Evil Clampets can feel the kind of embarrassment we Americans have felt each day since this herd of dimwitted scam artists stumbled into power.

Before President Trump took office, the crown prince of Abu Dhabi secured a secret meeting with Jared Kushner, and positioned himself to act as an intermediary with Russia https://t.co/Q5vYV6I2I8