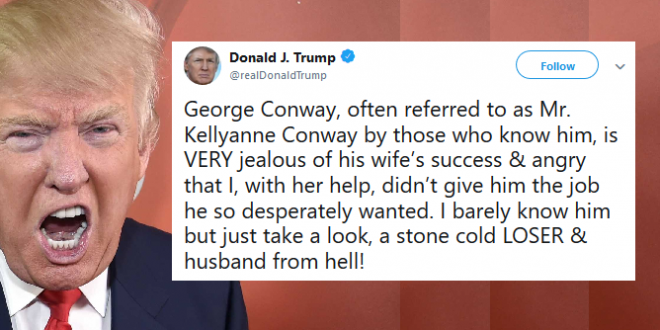 Trump and Conway have been trading barbs on Twitter in the past few days since Trump 2020 reelection campaign manager, Brad Parscale, suggested Kellyanne Conway’s husband George Conway only criticizes the president because he is “jealous” of his wife.

The war of words began when Conway wrote, “*All* Americans should be thinking seriously *now* about Trump’s mental condition and psychological state, including and especially the media, Congress—and the Vice President and Cabinet.” On Sunday, he added: “His condition is getting worse.”

Conway said that contrary to Parscale’s tweet, he opted against working at the Justice Department after Trump offered him a position heading the civil division because he watched Trump attack the department’s leaders and then fire James B. Comey, the F.B.I. director, in early 2017.

Conway said he remembered riding down the West Side Highway in Manhattan and hearing on the radio that special counsel Robert S. Mueller III had been appointed to lead an investigation of possible connections between Russian election interference and the Trump campaign.

“I’m thinking to myself, this guy is going to be at war with the Justice Department for the next two years,” Conway said. “I’m not doing this.”

Congratulations! You just guaranteed that millions of more people are going to learn about narcissistic personality disorder and malignant narcissism! Great job! https://t.co/Dk9bI3sBs7

Previous Reagan’s Daughter: Dad Would Be “Horrified” At Trump
Next Colbert Challenges Devin Nunes To Sue Him [VIDEO]