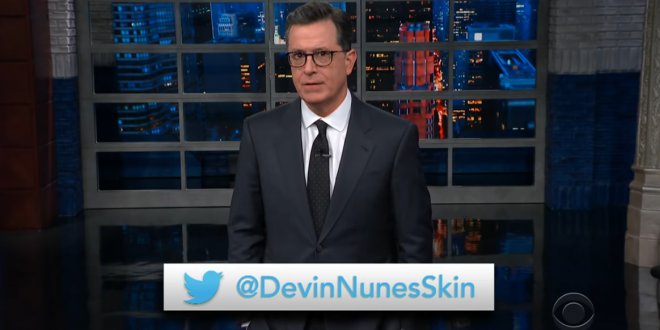 A lawsuit by Republican Rep. Devin Nunes, aimed at Twitter and some of its users for alleged defamation and negligence, has led to a huge spike in followers for one of the parody accounts he targeted. Now, late night host Stephen Colbert has taken it a step further by creating another parody account aimed at the Republican California congressman.

“There’s nothing in Twitter’s terms of service that says you can’t have a parody account. That’s why it is totally legal for us to make @devinnunesskin. This is a real account, an actual account where you can find such announcements as ‘still thin,'” Colbert said. Colbert doubled down, saying, “Devin, we look forward to your lawsuit.”

Previous Trump Calls George Conway “The Husband From Hell”
Next Games Of Thrones Star: Joffrey Is President Of The US