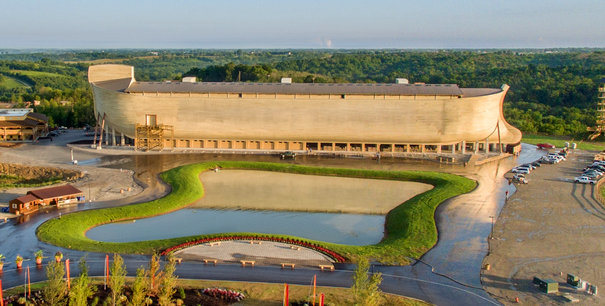 They were supposed to come two by two, or better yet, stuffed into minivans and tour buses, but tourists to Kentucky’s life-sized Noah’s Ark attraction so far seem fine being left out in the rain.

The Ark Encounter has sold just over 860,000 tickets in the past year, according to the Courier Journal, which obtained the numbers via a Freedom of Information request. That’s just one third of the high-end estimates park officials made when the attraction opened in 2016.

The numbers were gathered from July 2017 through June 2018. Park officials initially estimated the Ark would bring between 1.4 million and 2.4 million visitors per year. Ark Encounter officials say the numbers are accurate, but don’t reflect total visitors, though they declined to clarify that number.

Ark Encounter spokesman Mark Looy estimated that 1 million guests came to the Ark Encounter last year, and on busy days, between 7,000 and 8,000 people visit the park. He said attendance has been growing since the park opened two years ago.

“We are like most attractions in that we don’t release annual attendance figures,” Looy said in an email. “Furthermore, one can’t look at ticket sales to come up with the grand total.” Looy said he couldn’t specify the total annual guests because, in part, children under 5 years old attend the park for free.

For attendance to be 1 million visitors at the ark park, 14 percent of all its attendance needs to be free or non-ticketed, according to The Freedom From Religion Foundation.

Previous POLL: 43% Of Republicans Say Trump Should Have The Power To Shut Down Media Outlets For “Bad Behavior”
Next Catholic League Accuses Pennsylvania AG Of “Bigotry” For Sexual Abuse Probe Of Over 300 Predator Priests