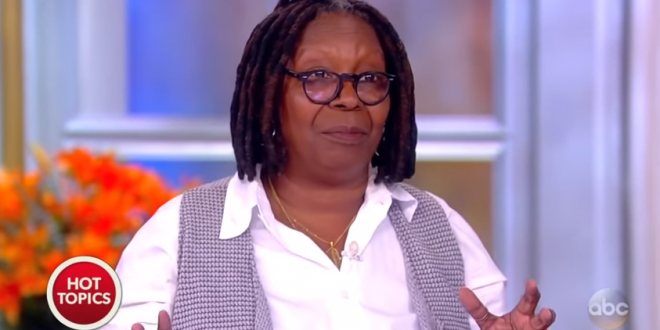 “I want to clear up what happened. She seemed to leave out some key points,” Goldberg stated. “Well, she left a lot of pertinent stuff out.” Goldberg continued, “[Jeanine] was upset when she got here because [anti-Trump CNN contributor] Ana Navarro was here instead of Joy [Behar]. And after the segment — which ended when it was supposed to, she then called everybody at the table a name I cannot repeat on TV and said it in front of the audience.”

Goldberg explained that she exited the set to calm down. She said Pirro easily could have walked around her backstage without a confrontation, but chose not to. They both agree on what happened next: Pirro came up, declaring ‘I spend my whole life fighting for victims’ and Goldberg fired off some “choice words” back.

“Yes, I did say [f*** you], but I did not spit on her,” said Goldberg. “I did not intimidate her, no one chased her out of here saying ‘get out.’ But she did leave here cursing at the people who booked the show, she cursed at the guys who do the security for the show. You can come to this show, we treat everybody with respect. But you cannot come and call people names.”

As you’ll see in the second clip below, Pirro has spent today crying to her fellow propagandists on state television.

“America is better than this. America is the place where you have free speech. But what happened yesterday was a microcosm of what is happening in the nation.” – Judge Jeanine joined @foxandfriends to discuss her clash with Whoopi Goldberg on “The View.” pic.twitter.com/N04R78NbNI

Previous Michael Avenatti: Michael Cohen Has Multiple Secret Tapes Of Trump And Should Release Them All [VIDEO]
Next NEW JERSEY: Woman Launches GoFundMe For Bail Should She Succeed In Destroying Trump Baby Blimp