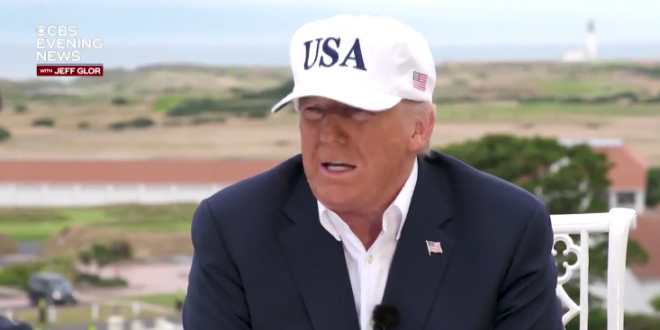 Trump On Asking Putin To Extradite Russians Charged With Hacking Dems: I Hadn’t Thought Of That [VIDEO]

President Trump said in a new interview airing Sunday that he hadn’t thought of pressing Russian President Vladimir Putin on extraditing the dozen Russian officials charged with hacking Democratic emails, while continuing to blame Democrats for the stolen emails that upended the 2016 presidential campaign.

The United States does not have an extradition treaty with Russia. Trump also asserted that the GOP was similarly not hacked during the 2016 campaign because the Republican National Committee were equipped with better cybersecurity.

WATCH: President Trump tells @CBSEveningNews‘ @jeffglor that he is going into the Helsinki summit with “low expectations” and that he will consider asking Russia to extradite agents indicted by Special Counsel Robert Mueller. More on @FaceTheNation Sunday. https://t.co/59FYX8FTIg pic.twitter.com/u0rwS8rkxk

Previous Princes Harry And William Refused To Meet Trump
Next Theresa May: Trump Told Me To Sue The EU Over Brexit