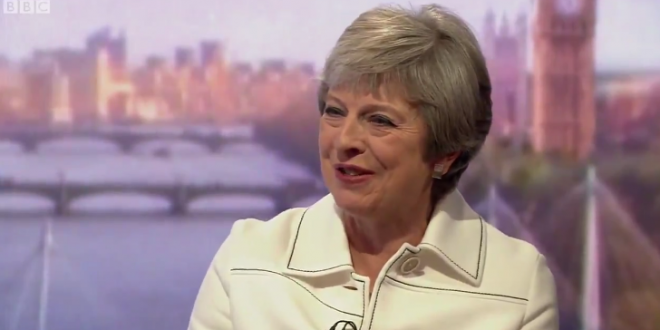 Theresa May: Trump Told Me To Sue The EU Over Brexit

Donald Trump told Theresa May she should sue the EU rather than negotiate over Brexit, she has told the BBC. The US president said on Friday at a joint press conference he had given her a suggestion – but she had found it too “brutal.” Asked by the BBC’s Andrew Marr what it was he had said, she replied: “He told me I should sue the EU – not go into negotiations.” She defended her blueprint for Brexit and urged her critics to back it. She said it would allow the UK to strike trade deals with other nations, end free movement of people, and end the jurisdiction of the European Court of Justice.

The PM says President Trump advised her to sue the EU. I’m not sure I’d take legal advice from a man whose relationship with the truth is tenuous, who has a disregard for basic human rights and who flouts the rules based liberal international order. #Marr

Trump apparently told Theresa May that the UK should “sue” the EU, rather than negotiate. Difficult to know what to do with that.

Where would she sue the EU – in the European Court of Justice?

The Brexiteers decision to lash themselves to Trump has again blown up in their face. “Sue the EU”. Jesus wept.

Trump’s advice to Trump on brexit talks: Sue the EU////

Donald Trump’s former chief strategist Steve Bannon tells LBC Theresa May completely missed the point of the US President’s negotiating advice on Brexit to “sue” the EU. Mr Bannon says it’s a “weapon, a tool, to go in hard” and “the central point of Brexit is independence.”