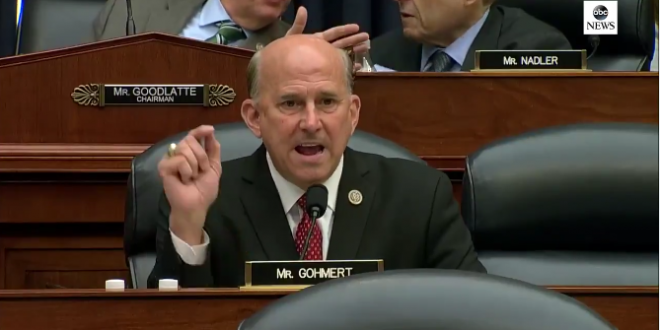 Republican Congressman Louie Gohmert of Texas exploded on FBI agent Peter Strzok during his testimony Thursday before Congress, questioning Strzok having a smirk on this face and looking innocently into this wife’s eyes and lying about an affair he had with former FBI lawyer Lisa Page.

Gohmert’s tough words were met with cries from Democrats appearing at the joint House Judiciary and Oversight Committees, with one Democrat shouting the Texas republican needed to take his medication.

“And I’ve talked to FBI agents around the country,” Gohmert said. “You’ve embarrassed them, you’ve embarrassed yourself. And I can’t help but wonder when I see you looking there with a little smirk, how many times did you look so innocent into your wife’s eye and lie to her about Lisa…”

“This is intolerable harassment of a witness!”

In a chaotic moment at House Judiciary hearing, Rep. Louie Gohmert asks FBI Agent Peter Strzok how many times he lied to his wife. The question drew cries of outrage from Democratic members. https://t.co/M3YsVmNmn5 pic.twitter.com/f0nEkO5ewO

Previous Sen. Jeff Flake Blasts Trump For Groveling Before Putin: This Sends Our Allies A Terrifying Message [VIDEO]
Next Theresa May Rolls Out Literal Red Carpet For Trump