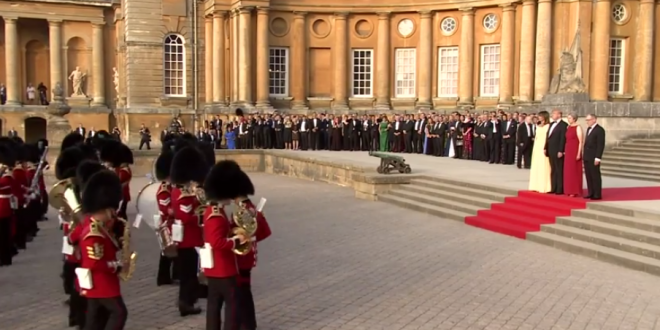 Theresa May Rolls Out Literal Red Carpet For Trump

Theresa May will step up her efforts to secure a post-Brexit trade deal with the United States on Friday as she sits down for her first bilateral talks with Donald Trump against a backdrop of furious protest across the country.

As the government released its long-awaited Brexit white paper on Thursday, she sought to placate angry Tory leavers by winning US support for her softer Brexit plan, telling Trump it created an “unprecedented opportunity” for a free trade agreement.

At a dinner held in Trump’s honour at Blenheim Palace on Thursday night she also vowed to “tear down” the bureaucratic barriers that Brussels had put in the path of business, as part of an attempt to overcome US fears over her new Brexit plan.

Theresa May held Donald Trump's hand while walking up the red carpet at Blenheim Palace before tonight's gala https://t.co/E5AIx26wPB pic.twitter.com/sgApvJicTu