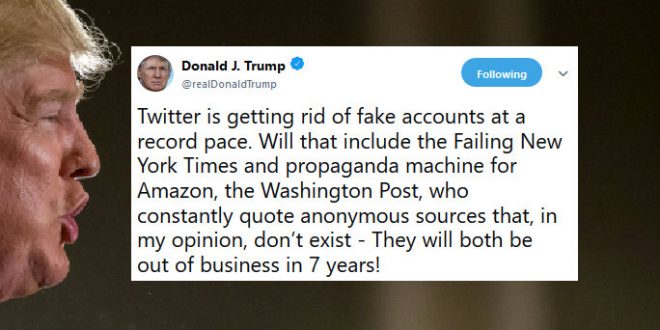 President Trump on Saturday floated the idea of Twitter dumping major national news publications including The New York Times and The Washington Post as the social media platform removes “fake” accounts. Twitter has stepped up its efforts to remove accounts on the platform in recent months amid criticism over harassment and fake accounts. The platform suspended more than 70 million in May and June, according to a Post report published Friday.

Twitter is getting rid of fake accounts at a record pace. Will that include the Failing New York Times and propaganda machine for Amazon, the Washington Post, who constantly quote anonymous sources that, in my opinion, don’t exist – They will both be out of business in 7 years!

The irony, of course, is that nobody has done more for NYT’s/WaPo’s revenues — and therefore done more to ensure Donald J. Trump’s prediction will be wrong — than Donald J. Trump. https://t.co/20pDpdJtAB