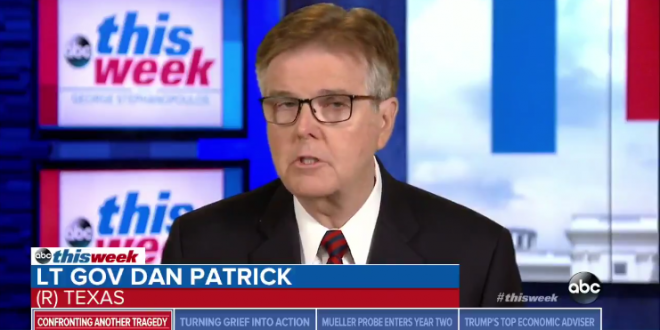 What happened to schools having too many entrances?

The Texas lieutenant governor, speaking two days after 10 people were killed in a school shooting in his state, said abortion, divorce and violent video games and movies show that ‘we have devalued life,’ which may be a cause of school shootings.

Republican Lt. Gov. Dan Patrick told ABC News Chief Anchor George Stephanopoulos on “This Week” Sunday, “We have devalued life, whether it’s through abortion, whether it’s the breakup of families, through violent movies, and particularly violent video games. We have to look at ourselves, George, it’s not about the guns, it’s about us.”

Texas Lt. Gov. @DanPatrick: “Should we be surprised in this nation?” following deadly shooting in Texas, adding Americans have “devalued life.”

“Whether it’s through abortion, whether it’s the break-up of families, through violent movies, and particularly violent video games.” pic.twitter.com/EBjcSRzcgN

Texas Lt. Gov. @DanPatrick points to violent media and desensitization as part of cause for deadly school shooting Friday, says schools need to be ‘hard targets.’

“We still have this gun debate, George, of whether or not teachers should be armed or not.” #ThisWeek pic.twitter.com/AdsUT4jR7q

Previous Giuliani: Trump Deserves Details On FBI Informant Or Else Any Interview With Robert Mueller Would Be A Trap
Next Father Of Parkland Victim Rages At “Idiotic” Texas Lt. Gov. Dan Patrick: He Should Be Removed From Office