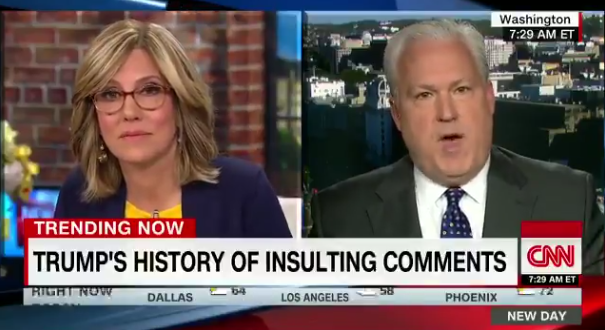 CPAC Director Matt Schlapp: Journalists Don’t Get To Say If Trump Is Lying, That’s For The Public To Decide

“We have big political disagreements in this country, and I think it’s wrong for journalists to take that next step. And granted, she’s a comedian, but plenty of journalists do it as well. They take the next step. Just present the facts. Let the American people decide if they think somebody is lying. The journalists shouldn’t be the one to say that the president or that his spokesperson is lying, because what that does to 50 percent of the country is it makes them feel like they’re not credible to listen to anymore.” – CPAC director Matt Schlapp, speaking this morning on CNN. Schlapp’s wife Michelle is the White House Director of Strategic Communications.

Matt Schlapp: President Trump is “mocked more than anybody on the face of the earth and it’s also okay for him to defend himself” https://t.co/Ap20VYdaJ3 pic.twitter.com/vL8EMPFrsw

“When you come on and you are upset about this comedian … you do not match that in any way when it comes to the President”: @ChrisCuomo confronts American Conservative Union chair @MSchlapp over Michelle Wolf’s WH dinner monologue and Trump’s history of insulting comments pic.twitter.com/7PhZTOEyNg

“It just got more and more uncomfortable,” he said of what he saw as a “mean-spirited” attack on Sarah Huckabee Sanders and “repulsive” jokes about abortion pic.twitter.com/ASvLvHV58c